skip to main | skip to sidebar

Comparison of different web browser. Which is your favourite?

i think most of people on the net look for speed. so according to this chart the most choices was mozilla firefox.
Posted by Tanakwagu at 10:18 PM No comments:

This article was written because report that many website even facebook page was attack by DDoS recently.

To make clear what is DDoS attack here is the nice definitaion from wikipedia.

A denial-of-service attack (DoS attack) or distributed denial-of-service attack (DDoS attack) is an attempt to make a computer resource unavailable to its intended users. Although the means to carry out, motives for, and targets of a DoS attack may vary, it generally consists of the concerted efforts of a person or people to prevent an Internet site or service from functioning efficiently or at all, temporarily or indefinitely. Perpetrators of DoS attacks typically target sites or services hosted on high-profile web servers such as banks, credit card payment gateways, and even root nameservers. The term is generally used with regards to computer networks, but is not limited to this field; for example, it is also used in reference to CPU resource management.

One common method of attack involves saturating the target machine with external communications requests, such that it cannot respond to legitimate traffic, or responds so slowly as to be rendered effectively unavailable. In general terms, DoS attacks are implemented by either forcing the targeted computer(s) to reset, or consuming its resources so that it can no longer provide its intended service or obstructing the communication media between the intended users and the victim so that they can no longer communicate adequately.

Denial-of-service attacks are considered violations of the IAB's Internet proper use policy, and also violate the acceptable use policies of virtually all Internet service providers. They also commonly constitute violations of the laws of individual nations. 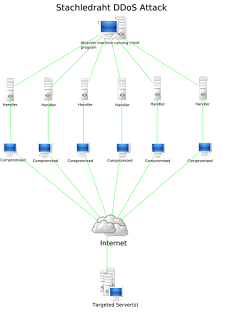 Ping Flood
The most basic of attacks is the ping flood attack. It relies on the ICMP echo command, more popularly known as ping . In legitimate situations the ping command is used by network administrators to test connectivity between two computers. In the ping flood attack, it is used to flood large amounts of data packets to the victim’s computer in an attempt to overload it. You can see an example of the ping flood attack below.

There is also type of DDoS attack -denial-of-service attack
and no one can stop this from happen because hackers always sharpening their skill to test a security of specific website,blogs etc.
Posted by Tanakwagu at 10:56 PM No comments: